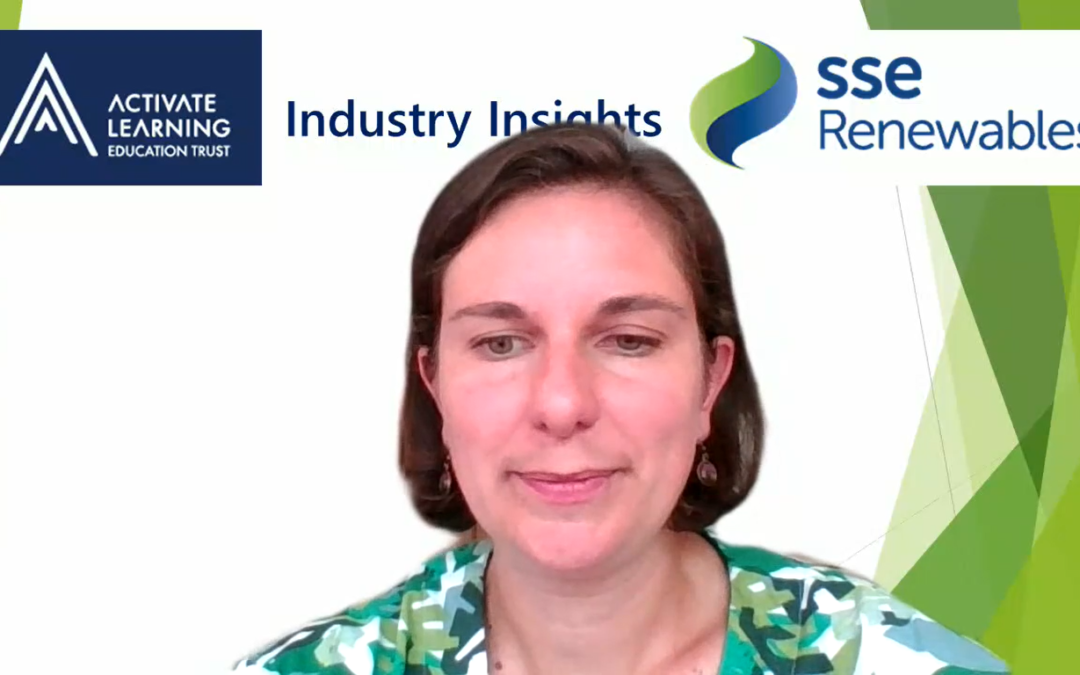 On Thursday 2 July, students across the Activate Learning Education Trust (ALET) listened into the eighth Industry Insight talk in the series, this time with the spotlight on SSE Renewables.

Kicking off the session, students heard from Ross, who has been General Manager at Greater Gabbard Offshore Winds Ltd for two years. Ross grew up near a wind farm and always knew he wanted to do something with renewable energy. He studied Mechanical Engineering at Strathclyde University before joining Scottish Power on their graduate scheme. He then moved to SSE Renewables about 12 years ago. He has taken leaps in his career into trading and then again into general management, but the company has supported him with training and professional development to help him make a success of these moves. His tips for students are that you have to be flexible and tailor your communication to who you are talking to in order to work together with others successfully.

Attendees then heard from Julie O’Brien, Engineering Manager for Onshore Wind Projects at SSE Renewables. Julie also studied Mechanical Engineering at Strathclyde University, then starting her career in a very technical design role. She then went down the consultancy route and became a Chartered Civil Engineer. She has also had a few roles within SSE, first in transmission and then in renewables. She then went through the Project Management Academy, which provides in house training for those in SSE wanting to move into Project Management. Julie stressed that it is important to keep learning and developing yourself, especially when you work in such a technical field, something that working for a company like SSE Renewables enables you to do.

Finally, we heard from Jennifer Ross, a Graduate Engineer at SSE Renewables. Jen also studied Mechanical Engineering at Strathclyde University, after a false start studying maths, which she found too theoretical. She then started a Graduate Scheme with an Oil Company, before realising that renewable energy was where her interest lay. She switched to the Graduate Scheme at SSE Renewables, where she is reaching the end of her two-year programme. She admitted it wasn’t easy to make the decision to make changes to the direction her career was going in and that she didn’t make the decisions she made lightly, but that she learnt a lot about other pathways through talking to her friends and other students about their plans. Finding out about as many different pathways as possible means you are in a better position to be able to make a decision about where you want to be.

Thank you to all who attended the talk and to Ross, Julie and Jen, for their time and providing insights into their careers and SSE Renewables.

If you unfortunately missed the virtual session, you can watch it here: