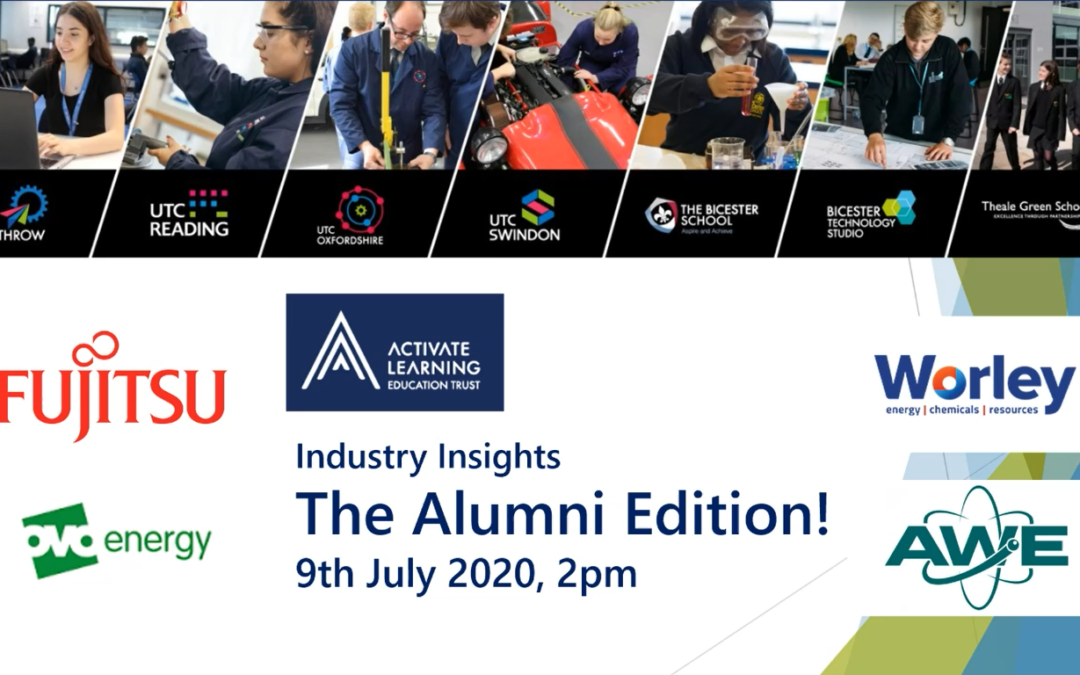 The Activate Learning Education Trust (ALET) were thrilled to talk to four Alumni in the ninth Industry Insights Talk of the series on Thursday 9 July.

Schools and colleges in the ALET pride themselves on the amazing destinations of students when they finish their studies. Having kept in touch with their alumni, it was a delight to have them back (virtually!) representing their employers and being inspirational for current students.

Toby told us about his apprenticeship at Sky and how he had full control over the projects he worked on and that we was actually working on real life problems. This may have meant that he would get a call at 3am, but it gave a relevancy to his work, which he enjoyed. The training Sky gave him made him ready for this level of responsibility. He was grateful for the Industry Projects that he’d been involved in in college, as these had given him something to talk about during interviews and to include on his CV as industry experience. His apprenticeship put him in a good position to secure a great job at OVO Energy.

Becky went straight to AWE after leaving college. She really enjoyed the rotation of work placements that were offered to her during her apprenticeship and this really helped her to improve her skills, gain self-confidence and be in a good place to decide which area of the business she wanted to work in once she had finished her placements. Since last year she has been working on NTR Special Projects, an area that carries a lot of responsibility with it, but which Becky finds incredibly interesting.

Carl joined Fujitsu as an apprentice in 2019, after having completed the UTC Pipeline Programme with them at UTC Reading. The Pipeline Programme pairs students with industry over four days a year and provides technical insights, mentoring and development opportunities for students and the chance for industry partners to get to know the students before recruitment begins. Since on his apprenticeship, he has also completed different rotations, which will help him to get to know the business and decide where he would like to end up.

Jordi went to university first but decided after a year that it wasn’t for him. He then started an apprenticeship with engineering company, Worley. Here he is learning a lot, not just from the formal teaching that is provided, but also from all the people he works with. His tip to students is to make the most of the knowledge of all of the people around you. Ask lots of questions, make sure you benefit from the ambient knowledge around you, as often this ends up being as if not more important than the technical skills you are learning.

Thanks to all four panellists for their insights and to all the audience who joined us.