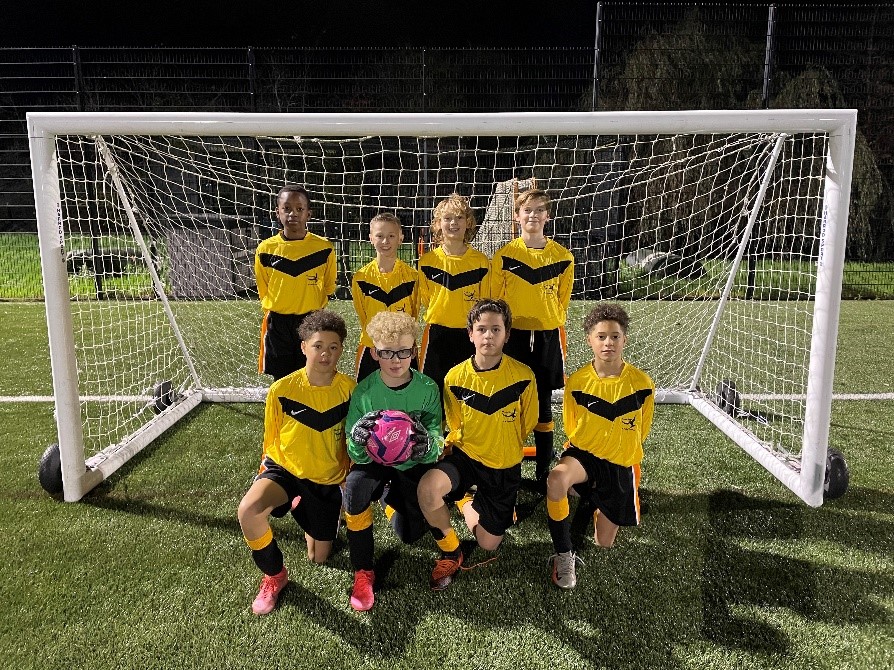 An amazing performance was delivered by our Year 7 football team, who showed great skill and determination in picking off some of the best local school sides to claim the crown at the annual District 5-a-side Football Competition.

Taking place at the John Madejski Academy on Tuesday, November 30, the competition included some very talented Berkshire school sides, which made for an incredibly exciting afternoon of football. Theale were placed in a tough group stage with the likes of Reading Boys and Oakbank.

After some very close and exciting games, the boys finished as group winners qualifying them for the knock-out stages, where we were met with one of the favourites to win – Maiden Erleigh School.

The next game started with both defences standing strong, involving some robust challenges being made by teammates Max Goad and Bundalla Chismuno. At this stage it was the case of whoever scored first would become victorious. After some neat one touch football, Theale’s Maeson Vaughan created an opening and dispatched to give Theale a 1-0 win.

This led Theale through to the semi-finals to play against Denefield, which in itself meant the boys would come across a completely different challenge. From the first whistle, the game was end to end, with both teams looking like they could score at any point. There were some great chances being created by Oliver Armstrong, Oliver Cocks and Hayden Vaughan.

It was another victory for Theale as yet again, the team managed to stand strong and come out with a hard fought 4-2 win with goals coming from Conrad Glowacki and Maeson Vaughan. A special mention must go to our goalkeeper Jack Yapp, who made an incredible last-minute save.

It was time for the Cup Final and to find out who would win the overall district title. Theale were up against their main rivals Willink, so it was always going to be a close encounter.

Theale started on the front foot with Maeson Vaughan scoring an early goal, but Willink were quick to respond with the score being 1-1 at the final whistle which took the game to penalty kicks.

After a nail-biting shoot out, it was Theale who kept their calm with some superbly executed spot kicks from Maeson Vaughan, Hayden Vaughan and Conrad Glowacki crowning Theale Green School U12 District Champions 2021!

Well done to the whole team.