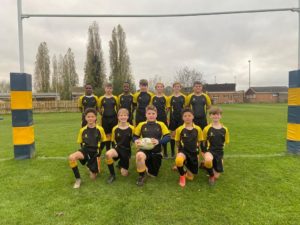 Squad competing at the Berkshire festival.

This competition took place at Reading Blue Coat School and involved 28 teams going toe to toe in an extravaganza of rugby.

It was certainly a sight to behold, with a sea of rugby as far as the eye could see. In total, we played six games, recording a very impressive four wins, one draw and one defeat. In a very tough opening pool, we recorded hard-fought wins against Forest (Wokingham) and Claires Court (Maidenhead).

Theale more than matched our opposition’s physicality and moved the ball quickly to race away and score some very impressive tries.

Our only loss in the competition was against the hosts, Reading Blue Coat. It was an arm wrestle from start to finish with our forwards taking it to the opposition. The game was played at a fast pace with both teams scoring early tries. In the end we lost narrowly, however, the boys can be very proud of their performance and handling skills.

After a lunchtime break, we proceeded into another pool of matches against some notable opposition. At this stage in the competition, we looked to up the intensity in our play; working on our line speed, recycling of the ball at the breakdown and link up play between forwards and backs. We certainly did not disappoint, playing some of our best rugby in the later stage of the competition. This saw us record excellent wins against Maiden Erlegh, Holyport (state sponsored school for Eton College) and a draw against Licensed Victuallers (Ascot), where the game was stopped early due to injury.

Overall, the team can be very proud of their achievements in the competition, playing against some of the best state and private schools in the county.

In our league campaign before half term, we played games both home and away. We achieved wins against Willink, Reading Boys and Little Heath and drew against Highdown.

It must be noted that our biggest achievement to date is the number of boys who regularly attend training each week. In all, we have had 30 boys attend training, many of whom have represented the school during the course of the season. The vast majority of these students had never played the contact version of the game before and have made much progress considering their starting point at the start of the school year.

It is also really encouraging to see some of these students go on to join local clubs in the area. The future is bright for Theale Green rugby.