Theale Green students go on to do amazing things 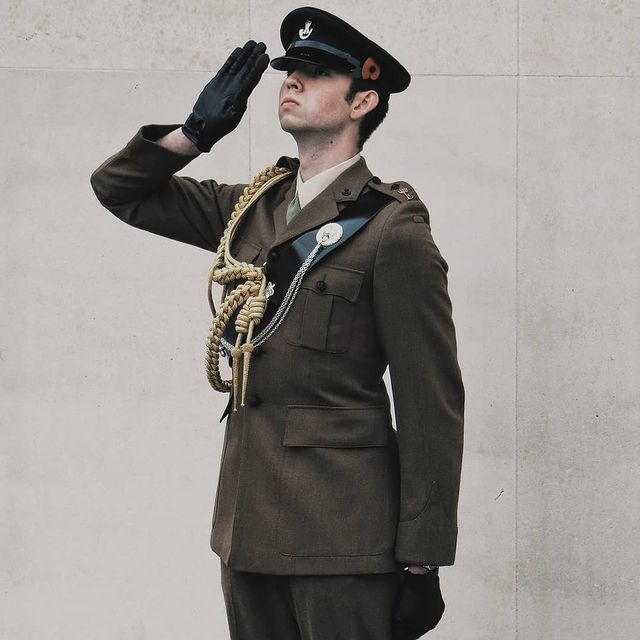 Having studied at Theale Green School and Sixth Form from 2010-2017, and then staying on to work with students and staff in the ASDU, Dominic completed his qualifications and entered the selection process for the British Army.

Since then, Dominic trained at the Royal Military Academy Sandhurst (RMAS) and was commissioned as an Officer into the Rifles in August 2020.

We caught up with Dominic to hear how he was getting on and to reflect on his time at Theale Green School and Sixth Form.

Dominic said: “I had always had an interest in the Armed Forces and had spent some time with a local cadet unit as a teenager. I found myself searching for a career where I could travel the world, have a meaningful impact on it, and have the opportunity to lead and support a team of dedicated professionals.

“The Rifles are an infantry regiment, meaning they are the soldiers you see involved in combat, peace keeping and humanitarian operations across the globe. They were my first choice of unit, and I am really privileged to have been selected to become a Rifleman.

“Since then, I have been posted to Northern Ireland with the Second Battalion. Even during the current restrictions, in the last few months I have been able to lead my platoon of 32 soldiers, a stint as the Equerry to TRHs Prince Edward and Countess Sophie and commanded a 36-man team on Op RESCRIPT as part of the Army’s COVID response.

“Is it what I expected? Not always, but I absolutely love it. Regardless of what taskings you’re committed to, as an Officer you have a real opportunity to have a meaningful impact on people’s lives. So, whilst I’m not currently running around the battlefield doing what I signed up for, I’m able to have a really positive impact on those I’m lucky enough to lead.

“Without the opportunities I had during my time at Theale Green, I would not have passed the Army Officer Selection Board. I was given the chance to explore my leadership style through being part of the Head Team in Sixth Form, as well as numerous other extra-curricular opportunities where I could get some life experience and a breadth of perspective.

“Subjects like drama surprised me with how much they helped my performance in training. As Officer Cadets we were expected to deliver a set of ‘Orders’ to our platoon before a patrol action – essentially a brief on what we were going to do. I found myself confidently delivering a story on what our mission was, as if I was back on stage in one of our productions. Ultimately, I think it was the challenges I faced and life experience I gained at Theale Green that really helped me.

“My proudest moment at Theale Green was the moment I found out I had been selected as Head Boy for my final year. It felt like a lot of hard work had paid off, and I had some great experiences working with the fellow members of the head team and the prefects. We managed to pull together some great projects, such as our Winter Wonderland themed pensioners party for the local community.

“As a member of staff in the ASDU after my studies, it was the times where you knew you’d really made a difference to one of the students by just being there for them. That feeling is something that never left me and pushed me to seek the same feeling in the Army.

“I loved my time with the drama department when I first arrived; I was an incredibly shy boy with a fringe down to my chin, having gone from a Year 6 of 9 students to a Year 7 of over 250! The drama department really helped me out, and without their tireless support I wouldn’t be where I am today.

“I was able to really get stuck into the extra-curricular as well; whether it was public speaking, running literacy workshops or charity fundraising, I could really make the most of my time at Theale Green.

“But really, and this will sound cliché – it was the friends I made there – they stopped me going down the wrong path and made my time at Theale Green worth it. Serving away from the mainland has made me realise just how important the friends I made at Theale Green are, and how we still support each other and get together despite it being 4, 5, or even 6 years since we were students there.

“Oh and being a member of what is unequivocally the best House. Go Hunt!

“Looking forwards, this year our battalion is looking forward to training exercises in Northern Ireland as well as back on the mainland, all while we remain committed to supporting operations in the UK. In September we will head out to Kenya to train as a Battle Group, and from there will deploy overseas on operations in 2022.

“To anyone considering a career in the Army, I’d say – just go for it! I have met all sorts of people in this job, from many different backgrounds. What makes the army great is its people, and the diversity of characters you find. There are a lot of misconceptions about what the Army does and the sort of people they are looking for; I myself believed many of them as well. It doesn’t matter how academic you are, if you’re going to university, what gender you are or whether you want sign up at 16 or after education, there’s something you can look at.

“Do your research, get fit, get some life experience and get yourself to the careers centre to find out what you’re interested in. It won’t be for everyone but applying to join the British Army when I was in Year 13 was one of the best decisions of my life. You can find out more at https://www.army.mod.uk/.”

We would like to thank Dominic for keeping in touch and are delighted to be welcoming him back to Theale Green School this summer, to share his experiences with our students.